How much will I take?

Fentanyl patches are usually only used if you've been taking other strong opioid painkillers.

Fentanyl is a potent agonist of mu opioid receptor. It is used to relieve severe pain, such as after surgery or during cancer treatment, and breakthrough pain (flare-ups of intense pain despite round-the-clock narcotic treatment). Fentanyl is an extremely powerful analgesic, 50 - 100-times more potent than morphine. Fentanyl harbors massive risk for addiction and abuse regardless of its prescription form. Fentanyl abuse is especially dangerous to those without a tolerance to opioids. The substance's already elevated risk of overdose is multiplied when someone without a tolerance abuses it.

Pharmaceutical fentanyl is a synthetic opioid pain reliever, approved for treating severe pain, typically advanced cancer pain. It is prescribed in the form of transdermal patches or lozenges and can be diverted for misuse and abuse in the United States. However, most recent cases of fentany related harm, overdose, and death in the U.S. are linked to illegally made fentanyl. It is sold through illegal drug markets for its heroin-like effect. It is often mixed with heroin and/or cocaine as a combination product - with or without the user's knowledge - to increase its euphoric effects.

Excerpt from Center for Disease Control and Prevention:
https://www.cdc.gov/drugoverdose/opioids/fentanyl.html 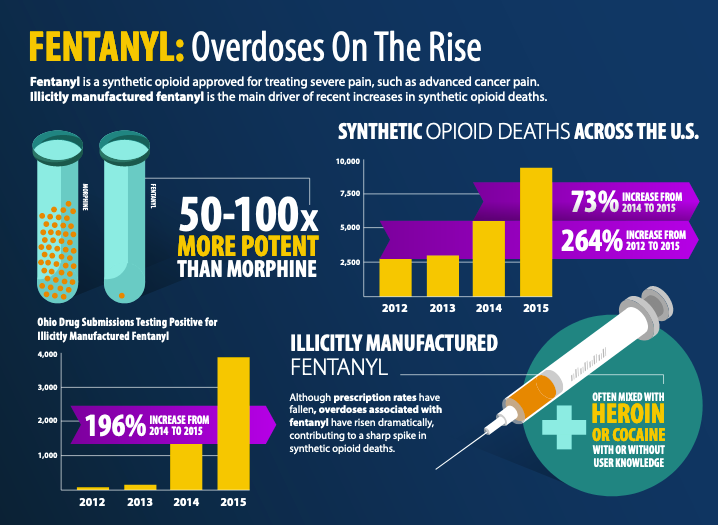 Non-pharmaceutical fentanyl is sold in the following forms: as a powder; spiked on blotter paper; mixed with or substituted for heroin; or as tablets that mimic other, less potent opioids.

Fentanyl works by binding to the body's opioid receptors, which are found in areas of the brain that control pain and emotions. Its effects include euphoria, drowsiness, nausea, confusion, constipation, sedation, tolerance, addiction, respiratory depression and arrest, unconsciousness, coma, and death. The high potency of fentanyl greatly increases risk of overdose, especially if a person who uses drugs is unaware that a powder or pill contains fentanyl

Why is fentanyl dangerous?

Opioid receptors are also found in the areas of the brain that control breathing rate. High doses of opioids, especially potent opioids such as fentanyl, can cause breathing to stop completely, which can lead to death. The high potency of fentanyl greatly increases risk of overdose, especially if a person who uses drugs is unaware that a powder or pill contains fentanyl. Fentanyl sold on the street can be mixed with heroin or cocaine, which markedly amplifies its potency and potential dangers.

Pharmaceutical fentanyl was developed for pain management treatment of cancer patients, applied in a patch on the skin. Because of its powerful opioid properties, Fentanyl is also diverted for abuse. Fentanyl is added to heroin to increase its potency, or be disguised as highly potent heroin. Many users believe that they are purchasing heroin and actually don't know that they are purchasing fentanyl - which often results in overdose deaths. Clandestinely-produced fentanyl is primarily manufactured in Mexico.

Fentanyl is now considered the number one drug leading to opioid overdose deaths in America.

A total of 539 drugs are known to interact with Fentanyl.

Pediatric:
Appropriate studies have not been performed on the relationship of age to the effects of fentanyl injection in children younger than 2 years of age.

Safety and efficacy have not been established.

Geriatric:
Appropriate studies performed to date have not demonstrated geriatric-specific problems that would limit the usefulness of fentanyl injection in the elderly. However, elderly patients are more likely to have age-related lung, kidney, liver, or heart problems, which may require caution and an adjustment in the dose for patients receiving fentanyl injection.

Other Medical Problems:
Make sure you tell your doctor if you have any other medical problems, especially:

Summary of Use During Lactation:
When used epidurally or intravenously during labor or for a short time immediately postpartum, amounts of fentanyl ingested by the neonate are usually small and are not expected to cause any adverse effects in breastfed infants.

The results of studies on the effect of epidural fentanyl on breastfeeding initiation and duration are mixed and controversial, because of the many different combinations of drugs, dosages and patient populations studied as well as the variety of techniques used and deficient designs of many of the studies.

In infants placed skin-to-skin after a normal vaginal delivery, epidural fentanyl given during labor may delay the infant's first suckling in a dose-dependent manner, perhaps because it can persist in the infant's serum for over 24 hours after discontinuation. However, it appears that with good breastfeeding support, epidural fentanyl plus bupivacaine has little overall effect on breastfeeding success.

No waiting period or discarding of milk is required before resuming breastfeeding after fentanyl is used for short procedures (e.g., for endoscopy). After general anesthesia, breastfeeding can be resumed as soon as the mother has recovered sufficiently from anesthesia to nurse. When a combination of anesthetic agents is used for a procedure, follow the recommendations for the most problematic medication used during the procedure.

Limited information indicates that transdermal fentanyl in a dosage of 100 mcg/hour results in undetectable fentanyl concentrations in breastmilk.

Newborn infants seem to be particularly sensitive to the effects of even small dosages of narcotic analgesics. Once the mother's milk comes in, it is best to provide pain control with a nonnarcotic analgesic and limit maternal intake of fentanyl to a few days at a low dosage with close infant monitoring.

If the baby shows signs of increased sleepiness (more than usual), difficulty breastfeeding, breathing difficulties, or limpness, a physician should be contacted immediately.

Effects on Lactation and Breastmilk:
Fentanyl can increase serum prolactin. However, the prolactin level in a mother with established lactation may not affect her ability to breastfeed.

Liver:
Alfentanil, remifentanil, and sufentanil are phenylpiperidine analogues of fentanyl and have a similar spectrum of activity, but differ in their pharmacokinetics, potency and routes of administration, and are used only in anesthesia. None of the phenylpiperidine opioids have been implicated in causing serum enzyme elevations or clinically apparent liver injury.

Fentanyl Hepatotoxicity:
Although fentanyl has many serious side effects and has been implicated in deaths from overdose and inadvertent use, it has not been linked to cases of clinically apparent liver injury. In large clinical trials, chronic fentanyl therapy for pain has not been associated with serum enzyme elevations or cases of hepatotoxicity. The dangers of fentanyl are largely from respiratory depression rather than liver injury. Fentanyl and its analogues are metabolized in the liver largely by the P450 enzyme system, and plasma levels are affected by inhibitors (yielding higher levels and increasing toxicity) and inducers (yielding lower levels and reduced efficacy) of CYP 3A4.

250th most prescribed medicine in the United States for 2017

SOME OF THE FENTANYL ANALOGS:

Fentanyl has a rapid onset and effects generally last less than two hours. It is the most widely used synthetic opioid in medicine. The patches for cancer pain are on the WHO List of Essential Medicines (the most effective and safe medicines). Illicit use of pharmaceutical fentanyl and its analogues first appeared in the mid-1970s. As of 2018 fentanyl was the most commonly listed opioid in overdose drug deaths surpassing heroin. Some heroin dealers mix fentanyl powder with heroin to increase potency or compensate for low-quality heroin.