Amphetamine is short for alpha-methylphenethylamine


Amphetamines are stimulants that speed up the body's system. Many are legally prescribed and used to treat attention-deficit hyperactivity disorder (ADHD). Amphetamine was first marketed in the 1930s as Benzedrine in an over-the-counter inhaler to treat nasal congestion. By 1937 amphetamine was available by prescription in tablet form and was used in the treatment of the sleeping disorder narcolepsy and ADHD. Over the years, the use and abuse of clandestinely produced amphetamines have spread. Today, clandestine laboratory production of amphetamines has mushroomed, and the abuse of the drug has increased dramatically.

Amphetamines are generally taken orally or injected. However, the addition of "ice," the slang name of crystallized methamphetamine hydrochloride, has promoted smoking as another mode of administration. Just as "crack" is smokable cocaine, "ice" is smokable methamphetamine.

The effects of amphetamines and methamphetamine are similar to cocaine, but their onset is slower and their duration is longer. In contrast to cocaine, which is quickly removed from the brain and is almost completely metabolized, methamphetamine remains in the central nervous system longer, and a larger percentage of the drug remains unchanged in the body, producing prolonged stimulant effects. Chronic abuse produces a psychosis that resembles schizophrenia and is characterized by paranoia, picking at the skin, preoccupation with one's own thoughts, and auditory and visual hallucinations. Violent and erratic behavior is frequently seen among chronic users of amphetamines and methamphetamine. 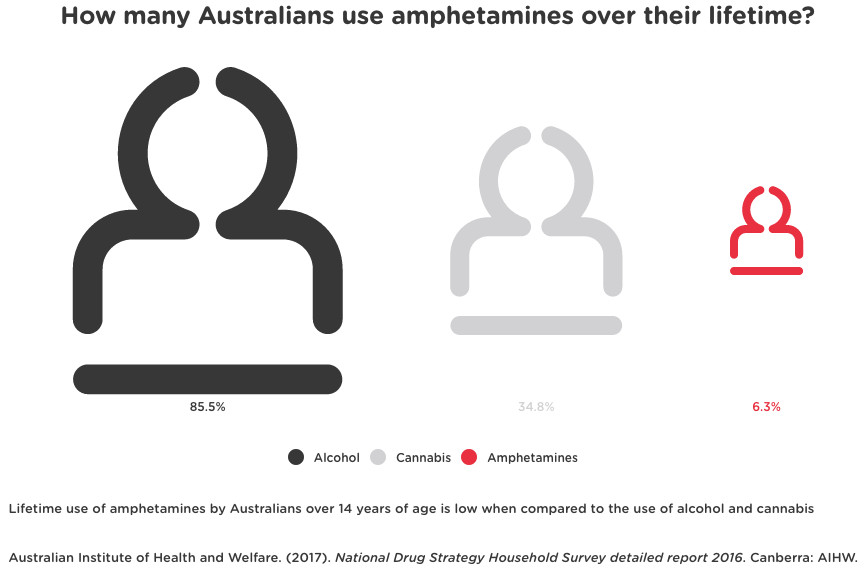 How many Australians use amphetamines over their lifetime?
https://infogram.com/amphet-vs-alcohol-and-cannabis-1gv4m7jxrwk0m18

Adderall: America's Favorite Amphetamine
Adderall is a clever brand and a deceptive brand. In America, amphetamine has traditionally been associated with tweakers, speed freaks, bikers, truckers and all-night sex orgies. Adderall changed all that. Stimulants like Ritalin have long been shown to help people with ADD and ADHD (attention-deficit hyperactivity disorder) concentrate for longer periods. So in 1996, Shire Pharmaceuticals introduced Adderall, a patented blend of amphetamine salts, to compete in the market for ADD/ADHD medications. The product was so successful that in 2001, Shire introduced the Adderall XR capsule in order to supply a low but steady dose to users all day long. Adderall XR is marketed as a productivity drug to help people with ADD, ADHD or narcolepsy remain alert and focused, but because it's essentially pure pharmaceutical amphetamine, it quickly became the prescription stimulant of choice for college students, wage laborers, the military, and pretty much everybody else.

The molecule for amphetamine is in the public domain, so it's impossible for a pharmaceutical company to patent it. That means there's no profit to be made by producing amphetamine for pharmaceutical use. But Shire found a way around this problem. Adderall is a custom blend of four different types of amphetamine salts - basically two mirror versions of the amphetamine molecule packaged in four separate ways. This is an old patent-medicine trick: When you're synthesizing a molecule in chemistry, you must attach it to a salt (such as an aspartate or sulphate) so you can easily crystallize or dissolve it. However, you can't patent amphetamine aspartate or amphetamine sulfate - but if you make a custom mix of these salts, you can call it a patent drug, even though both salts carry the exact same amphetamine molecule when they dissolve in the bloodstream.

The Drugs That Built a Super Soldier
Since World War II, little research had determined whether amphetamine had a positive impact on soldiers' performance, yet the American military readily supplied its troops in Vietnam with speed. "Pep pills" were usually distributed to men leaving for long-range reconnaissance missions and ambushes. The standard army instruction (20 milligrams of dextroamphetamine for 48 hours of combat readiness) was rarely followed; doses of amphetamine were issued, as one veteran put it, "like candies," with no attention given to recommended dose or frequency of administration. In 1971, a report by the House Select Committee on Crime revealed that from 1966 to 1969, the armed forces had used 225 million tablets of stimulants, mostly Dexedrine (dextroamphetamine), an amphetamine derivative that is nearly twice as strong as the Benzedrine used in the Second World War. The annual consumption of Dexedrine per person was 21.1 pills in the navy, 17.5 in the air force, and 13.8 in the army.

"We had the best amphetamines available and they were supplied by the U.S. government," said Elton Manzione, a member of a long-range reconnaissance platoon (or Lurp). He recalled a description he'd heard from a navy commando, who said that the drugs "gave you a sense of bravado as well as keeping you awake. Every sight and sound was heightened. You were wired into it all and at times you felt really invulnerable." Soldiers in units infiltrating Laos for a four-day mission received a medical kit that contained, among other items, 12 tablets of Darvon (a mild painkiller), 24 tablets of codeine (an opioid pain killer), and six pills of Dexedrine. Before leaving for a long and demanding expedition, members of special units were also administered steroid injections.

Excerpt from The Atlantic:
https://www.theatlantic.com/health/archive/2016/04/the-drugs-that-built-a-super-soldier/477183/

Important Information:
Amphetamine may be habit-forming, and this medicine is a drug of abuse. Tell your doctor if you have had problems with drug or alcohol abuse.

Do not use amphetamine if you have used an MAO inhibitor in the past 14 days, such as isocarboxazid, linezolid, phenelzine, rasagiline, selegiline, or tranylcypromine or have received a methylene blue injection.

Amphetamine may cause new or worsening psychosis (unusual thoughts or behavior), especially if you have a history of depression, mental illness, or bipolar disorder.

Amphetamine may cause blood circulation problems that can cause numbness, pain, or discoloration in your fingers or toes. Call your doctor right away if you have: signs of heart problems - chest pain, feeling light-headed or short of breath; signs of psychosis - paranoia, aggression, new behavior problems, seeing or hearing things that are not real; signs of circulation problems - unexplained wounds on your fingers or toes.

Avoid drinking alcohol.while you are taking this medicine.

Avoid drinking fruit juices or taking vitamin C at the same time you take amphetamine. These can make your body absorb less of the medicine.

Avoid driving or hazardous activity until you know how amphetamine will affect you. Your reactions could be impaired.

What other drugs will affect Amphetamine?
Ask your doctor before using a stomach acid medicine (including Alka-Seltzer or sodium bicarbonate). Some of these medicines can change the way your body absorbs amphetamine, and may increase side effects.

Many drugs can interact with amphetamine. This includes prescription and over-the-counter medicines, vitamins, and herbal products. Tell your doctor if you are taking an anti-depressant or any other medication for mental illness; an antihistamine such as allergy medication; seizure drugs, or any over the counter medications.

A total of 176 drugs are known to interact with Amphetamine.

Amphetamine is a potent central nervous system (CNS) stimulant that is used in the treatment of attention deficit hyperactivity disorder (ADHD), narcolepsy, and obesity. Amphetamine was discovered in 1887 and exists as two enantiomers: levoamphetamine and dextroamphetamine. The mode of therapeutic action in ADHD is not known. Amphetamines are thought to block the reuptake of norepinephrine and dopamine into the presynaptic neuron and increase the release of these monoamines into the extraneuronal space. At higher dosages, they cause release of dopamine from the mesocorticolimbic system and the nigrostriatal dopamine systems. Modulation of serotonergic pathways may contribute to the calming affect. Several currently prescribed amphetamine formulations contain both enantiomers, including Adderall, Dyanavel XR, and Evekeo, the last of which is racemic amphetamine sulfate. Amphetamine is also prescribed in enantiopure and prodrug form as dextroamphetamine and lisdexamfetamine respectively. Lisdexamfetamine is structurally different from amphetamine, and is inactive until it metabolizes into dextroamphetamine.

Breastfeeding:
Summary of Use During Lactation:
In dosages prescribed for medical indications, some evidence indicates that amphetamine does not affect nursing infants adversely.

The effect of amphetamine in milk on the neurological development of the infant has not been well studied.

Large dosages of amphetamine might interfere with milk production, especially in women whose lactation is not well established.

Breastfeeding is generally discouraged in mothers who are actively abusing amphetamines.

One expert recommends that amphetamine not be used therapeutically in nursing mothers.

Use of this medicine is not recommended in children younger than 17 years of age.

Use of this medicine is not recommended in children younger than 17 years of age.

Geriatric:
No information is available on the relationship of age to the effects of amphetamine tablets in geriatric patients.

Other Medical Problems:
Make sure you tell your doctor if you have any other medical problems, especially:

Pub Med article from 2013 Amphetamine, past and present a pharmacological and clinical perspective:
https://www.ncbi.nlm.nih.gov/pmc/articles/PMC3666194/

Addiction is a serious risk with heavy recreational amphetamine use, but is unlikely to occur from long-term medical use at therapeutic doses.