Thebacon (dihydrocodeinone enol acetate, trade name Acedicon) is semisynthetic opioid analgetic and antitussive compound. Boehringer-Ingelheim merketed Acedicon for the treatment of cough. Thebacon is a Schedule I drug, that has never been approved for use in US. 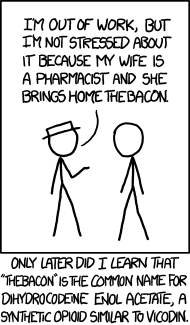 
Thebacon is an opioid agonist narcotic analgesic of the middle range and a strong antitussive, primarily used in Europe, although it is no longer in common use.

Thebacon's analgesic and antitussive potency is slightly higher than that of its parent compound hydrocodone, which gives it approximately eight times the milligramme strength of codeine