Tetrazepam was the most widely prescribed muscle relaxant in Germany. After a series of studies, which have shown, that tetrazepam caused cutaneous adverse effects and toxic epidermal necrolysis, the drug was withdrawn from the market.

2013 Tetrazepam Suspension:
As a result of the risk of unpredictable, serious skin reactions identified, the CMDh position is that tetrazepam-containing medicines should no longer be used in the EU.

The review found that half of the reported reactions with tetrazepam are skin disorders, which are sometimes serious, life-threatening or fatal. Serious skin reactions include Stevens-Johnson syndrome (SJS), toxic epidermal necrolysis (TEN), erythema multiforme and DRESS syndrome. They are unpredictable and can occur at any stage during treatment, including after short-term treatment, and at recommended doses.

(2016) Tetrazepam Allergy:
Tetrazepam has been widely used in clinical praxis in many countries for over 50 years. As an agent belonging to the class of benzodiazepines, it has an immediate sedative, muscle relaxing, anxiolytic and anticonvulsant effect. According to the German drug prescription report for 2012, tetrazepam was the most commonly prescribed muscle relaxant after botulinum toxin. Common adverse reactions following systemic intake are of neurological and gastrointestinal nature, while cutaneous reactions to tetrazepam are very rare, with only a few cases reported in the literature. It has nevertheless to be assumed that only a minority of cases is reported. The accumulation of these adverse reactions in comparison with other muscle relaxing drugs led the European Commission to suspend marketing authorizations of tetrazepam-containing medicines across the European Union (EU) in 2013.

On the clinical evidence leading to tetrazepam withdrawal:
In July 2013, the European Medicines Agency suspended the marketing authorization of tetrazepam across the European Union, due to serious cutaneous adverse drug reactions (ADR). Herein, we examine information described in PubMed and reported to the main Pharmacovigilance Databases (PhDB), related to ADR associated to tetrazepam. We tried to as certain described evidence on cutaneous ADR due to tetrazepam, which could have led to the end of commercialization of this drug that had been over 40 years in the market.

First, we conducted a search in MEDLINE and Cochrane (January 2015) about ADR due to tetrazepam, in peer-reviewed journals. Inclusion criteria were: studies performed on humans or tetrazepam-induced ADR case reports. Secondly, we collected data of spontaneous reporting of suspected ADR due to tetrazepam, from 1989 until December 2014, from the main PhDB: Spanish (FEDRA), French (BNPV) and American (FAERS). 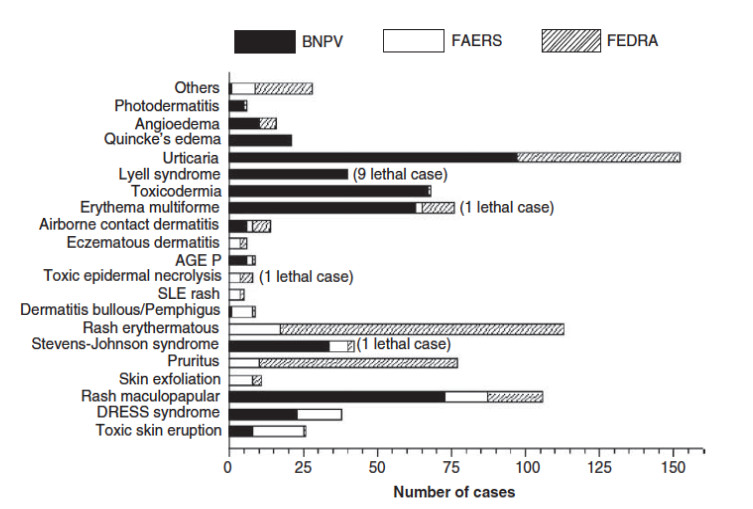 Our study reveals discrepancies in the information provided by these two different sources, both in the number of reported cases as well as in the kind of ADR reported. We stress the importance of a better knowledge communication between scientific literature and pharmacovigilance agencies, to prevent the use of marketed drugs with well-established side effects during long periods.

Overdosage:
Impairment of consciousness, CNS depression, coma or paradoxical excitation. Symptomatic and supportive treatment. Activated charcoal may be given orally if within 1 hr of ingestion. Benzodiazepine antagonist, flumazenil, is rarely required and can be dangerous, especially in mixed overdoses involving TCA or in patients dependent on benzodiazepines.

It was formerly used mainly in Austria, France, Belgium, Germany and Spain to treat muscle spasm, anxiety disorders such as panic attacks, or more rarely to treat depression, premenstrual syndrome or agoraphobia.


The European Commission has confirmed the suspension of the marketing authorisations for Tetrazepam in Europe because of cutaneous toxicity, effective August 2013