Barbital, one of the series of barbiturates, has hypnotic, sedative, and anticonvulsant properties and used under the trade name Veronal. It calmed manic patients and helped melancholic patients to sleep and was an effective inducer of sleep in insomniacs, but at the same time compound could induced dependence. It was substituted by the butyl analog, butobarbital, which was three times stronger and its period of action was much shorter due to its lipophilicity. 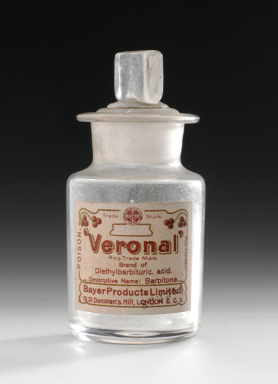 Veronal is the trade name for a barbiturate drug used to treat mental illness. Veronal was the first commercially available barbiturate, sold from 1903 onwards, and was named after the Italian city of Verona. Barbiturates were used to induce sleep by suppressing brain function and were also used as a hypnotic. They were popular up to the 1950s and were an improvement on their predecessors as the side effects were less severe - although unfortunately they could be extremely addictive. Barbiturates are only available on prescription.

New Zealand:
In 1903, doctors synthesised the first diethybarbituric acid, hailing it as an "infallible cure for insomnia". Billed as safe and non- addictive, it was an immediate success in Europe. The overdoses and deaths then began.

At the time of World War One, veronal was probably best known to New Zealanders as the name of a prominent racehorse. Then a young woman named Annie Travin overdosed in Gisborne, the first known local case. Her hospitalisation came as a wealthy gay aristocrat named Hugh Eric Trevanion died in London of veronal poisoning. Scandal sheet NZ Truth wrote of Trevanion: "he was exceedingly effeminate and lisped like a girl ... he wore a kimono and white kid shoes with high heels in the house".

During the 1920s, local veronal use accelerated. Though a doctor's prescription was officially required, an inquest into the death of an Auckland woman heard "the tablets could be bought from a chemist like a bag of lollies. Many people considered veronal tablets on a par with aspirins." So many deaths were linked to the drug by 1930 that the New Zealand authorities added it to the prohibited poisons list, along with morphine and cocaine.

Writer Robin Hyde, a sometime user, noted in 1932 "that it had been the cause of so many recent tragedies that the & New Zealand Pharmacy Board is moving in this direction. Every chemist in New Zealand has reason to know and & fear the effects of veronal when it is rashly used, or administered by people who do not realize its deadly power.

Fatal overdoses of this slow-acting hypnotic were not uncommon